The Lagos state Judicial Panel of Inquiry on Restitution for Victims of SARS Related Abuses and other matters on Monday disclosed that not less than eleven #EndSARS protesters were killed at the Lekki tollgate on October 20, 2020.

The panel revealed this in the report submitted to the Lagos State Government on Monday.

According to the report submitted by the panel, eleven protesters were confirmed dead while four others were “missing presumed dead”.

Forty-Eight others suffered injuries during the protest, with 20 securing gunshot injuries, while 13 others were assaulted by the military and police.

The panel also noted that 96 other corpses were presented by a Forensic Pathologist of Lagos State University Teaching Hospital, Professor John Obafunwa. 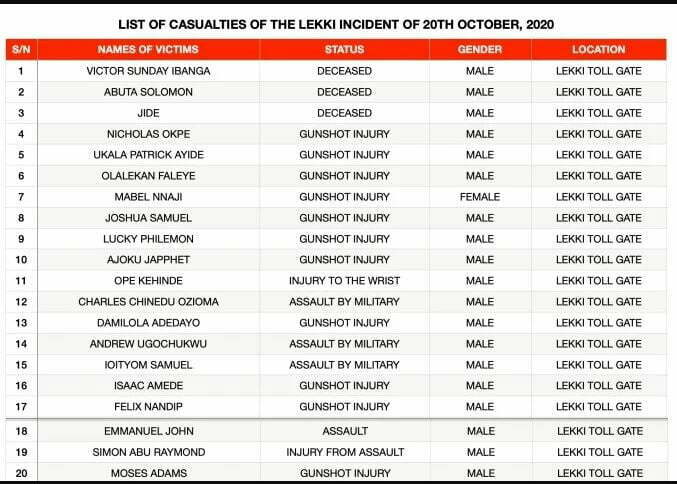 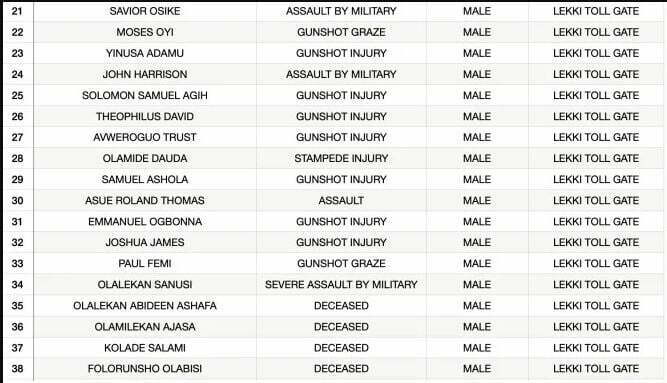 The report partly reads, “The evidence before the panel shows that after the Nigerian Army left, Nigeria Police Force, followed up with the killing of the protesters, shooting directly at fleeing
protesters into the shanties and the Lagoon at the Lekki Phase 1 Foreshore, close to the Lekki Toll Gate, floating corpse and one-shot close to Serah Ibrahim.

“Three trucks with brushes underneath were brought to the Lekki Toll Gate in the morning of October 21st October 2020 to clean up the scene of bloodstains and other evidence.

“The testimony and report of Professor John Obafunwa, a Forensic Pathologist of Lagos State University Teaching Hospital, showed that three corpses were deposited at the Mainland Hospital, Yaba Hospital, all from the Lekki Toll Gate and the autopsy conducted thereon revealed death from bleeding caused by penetrating objects or rifled weapon.

“The Panel finds that the fact of lack of identity of some of the other 96 corpses on the list supplied by Professor Obafunwa would not obliterate the fact that some of them could have come from the Lekki Toll Gate Incident of October 20, 2020, or that some other unidentified corpses may have been removed by their families or the military, as claimed by the EndSARS protesters, far and beyond the list tendered by Professor Obafunwa.”