DMX’s legacy was immortalized as a man beloved by his family, honored for his strong faith and respected as one of hip-hop’s greatest icons at his memorial service Saturday, with several heartfelt speeches from those who knew the rapper best.

The speakers included friends Swizz Beatz and Nas, as well as his daughter, who rapped in honor of her father.

Kanye West and Busta Rhymes were among the big names who attended the two-hour ceremony at the Barclays Center in New York. The service at the Brooklyn arena was closed to the public and restricted to close friends and family because of the coronavirus pandemic.

In a touching moment, DMX’s 15 children gathered on stage to talk — and sometimes rap — about the star as a father who taught them such lessons as “always say thank you,” “be kind to everyone” and that being afraid can sometimes show a person how to be brave.

“Our father is a king. Our father is an icon,” eldest son Xavier Simmons said, adding that he was honored to be his son: “This man deepened my ability to love.”

“What he wants you to do,” she said, “is love Jesus the same way he did. Love his babies. Love his family.”

West’s Sunday Service Choir kicked off the ceremony with a gospel performance. The hoodie sweatshirt-wearing ensemble performed a few songs, including their arrangement of “Excellent” and Soul II Soul’s “Keep On Movin’.” The choir took the stage during other moments of the ceremony, performing “Ultralight Beam” and Whitney Houston’s assisted vocals on the hymn “Jesus Loves Me.” 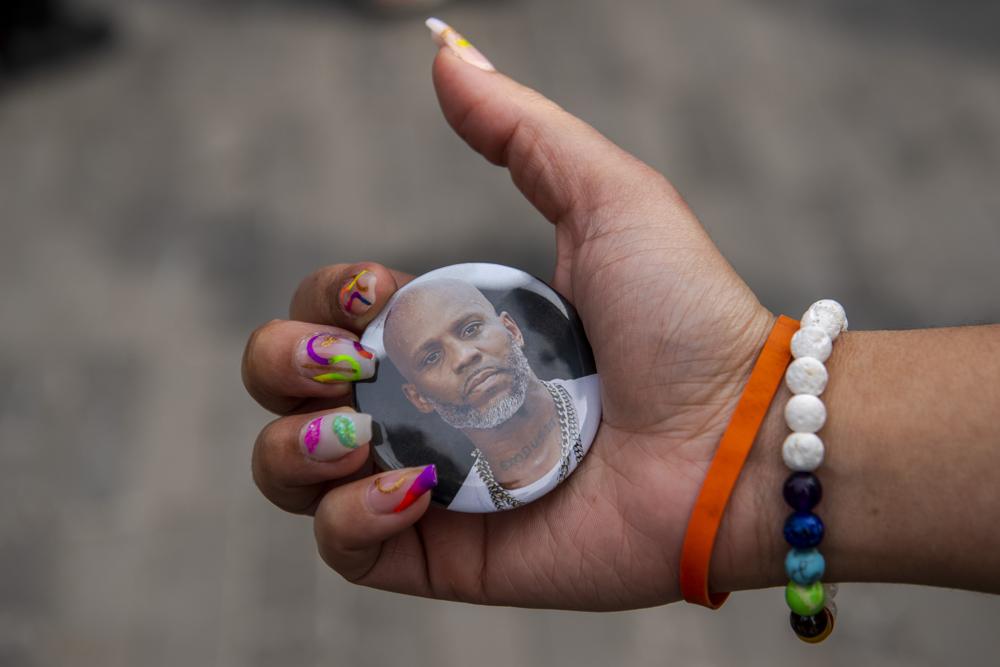 Nas reminisced about having a conversation with a teary-eyed DMX while filming a scene for “Belly,” a crime drama. He said DMX became emotional knowing the rapper was about to embark on a journey to become a “hip-hop icon.”

“It’s a sad day as well as a glorious day,” said Nas, who starred with DMX in the 1998 film. “That was my brother. We did a great movie together. On that movie, he was just rising up as a star. His first album didn’t even come out yet, but he knew his journey was starting.”

Eve said she was still having a hard time with DMX’s death, remembering him as a “man, a father, a friend.” She stood on stage with the Ruff Ryders collective, which helped launch the careers of Grammy winners Eve and Swizz Beatz and relaunch The Lox, formerly signed to Bad Boy Records.

After Eve spoke, Styles P talked about a time when he and DMX were both in the same jail. He said DMX fetched him from his cell and then took him to a part of the jail where he had a band set up along with a string of MCs.

“DMX was the ghetto-est person that ever existed,” Styles P said. “What he means to us is indescribable. … He celebrated us and pushed us. He was one of the most incredible individuals, because from the beginning of his career to the end, he accomplished something no one has ever accomplished. He was in pain the whole way. Whenever you (saw) him, that man was in pain, but he was built out of love. He was a beast with the rhymes.” 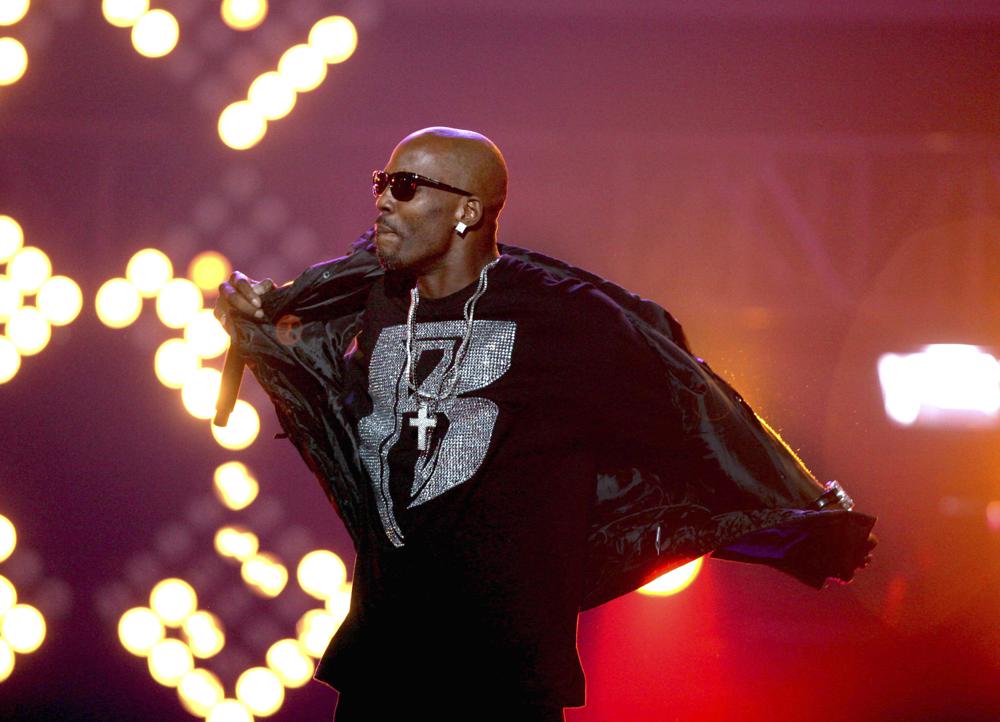 Jadakiss said DMX was the “happiest he ever been in life” during the last couple years.

Before the service, a massive black big-wheel truck with the words “LONG LIVE DMX” on a side of the vehicle carried DMX’s shiny red casket for more than 15 miles from Yonkers, New York — where the rapper grew up — to the Barclays Center. A plethora of motorcycles trailed the truck during the procession before arriving at the arena, where thousands of people crowded the streets.

Thousands of motorcycle riders surrounded the monster truck, revving up their engines. Others gathered at the arena while some of DMX’s biggest songs from “Where The Hood At” and “Ruff Ryders’ Anthem” blared from the crowd’s speakers.

Cynthia Roberts, a 57-year-old Brooklyn resident, said she has been a fan of DMX since his Ruff Ryders days. She showed up at the arena to pay homage to the rapper, saying she was struck by his rhymes, voice and musicianship.

“He was a true guy. He spoke his truth. He touched my soul,” said Roberts, who was sporting a DMX T-shirt. She called the rapper’s music timeless. 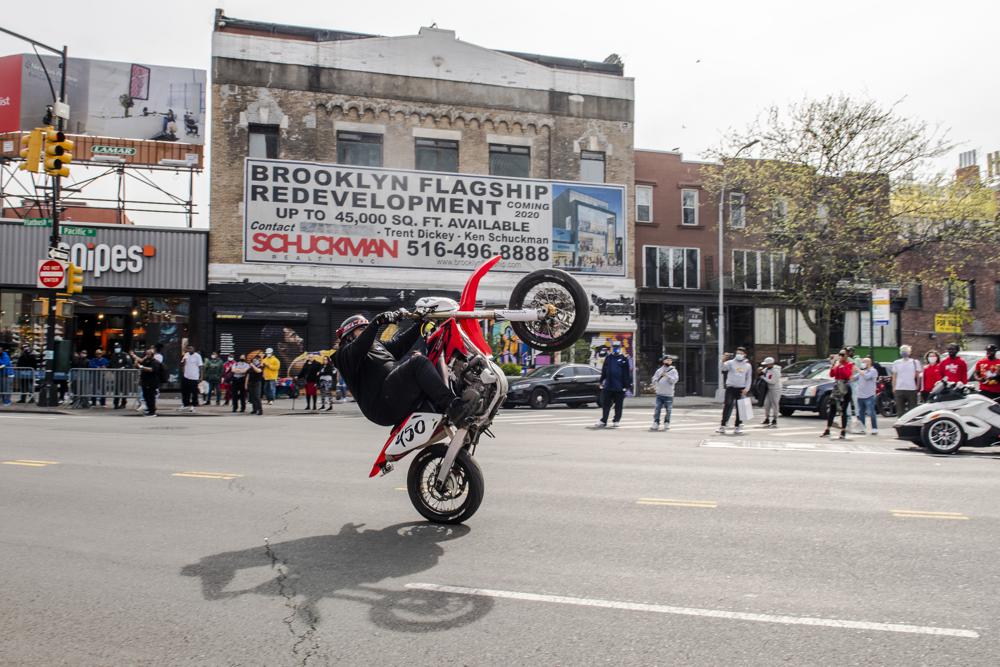 “I tell myself he was put here for that,” she continued. “We all have a job to do, and he did his job.”

DMX, whose birth name is Earl Simmons, died April 9 after suffering a “catastrophic cardiac arrest.” He spent several days on life support after being rushed to a New York hospital from his home April 2.

Programs with images of DMX were handed out to the service’s attendees ahead of the ceremony, which was livestreamed on the rapper’s YouTube channel. The four-page booklet had different images of the rapper, including one with his arms folded with wings and another photo of him standing on stage during a performance.

The 50-year-old Grammy-nominated rapper delivered iconic hip-hop songs such as “Ruff Ryders’ Anthem” and “Party Up (Up in Here).”

DMX arrived on the rap scene around the same time as Jay-Z, Ja Rule and others who dominated the charts and emerged as platinum-selling acts. They were all part of rap crews, too: DMX fronted the Ruff Ryders collective, which had success on the charts and on radio with its “Ryde or Die” compilation albums.

Along with his musical career, DMX paved his way as an actor. He starred in “Belly” and appeared in 2000′s “Romeo Must Die” with Jet Li and Aaliyah. DMX and Aaliyah teamed up for “Come Back in One Piece” on the film’s soundtrack.