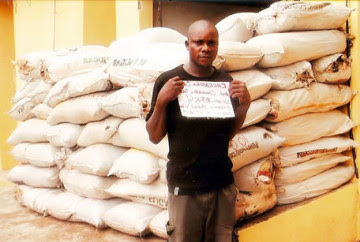 25-year-old John Okafor was arrested by operatives of the National Drug Law Enforcement Agency for being in possession of N48m cash. It was learnt that the suspect was apprehended with the money on the Abaji-Abuja Expressway on Monday by the anti-narcotic officials who were on a routine patrol.
He was said to be one of the  the passengers of a commercial bus coming from Onitsha, Anambra State, when he was arrested.Okafor insisted that the money belonged to an unnamed bureau de change firm in Onitsha, that he was an employee of the firm. He said he was heading for the foreign exchange market in the Federal Capital Territory to convert the sum to dollars when he was arrested.
He said:

“I work for a bureau de change in Onitsha. I was asked to purchase dollars at the foreign exchange market in Abuja with the money. When we got to Abaji, our vehicle was searched and the money was found. That is all I know.”

It was gathered that a drug dealer, Chukuka Ugbai, was arrested with 79 bags of weed said to have tested positive for cannabis in Bako village in the Kwali Area Council, Abuja during the same patrol.
The drug which weighed 817 kilogrammes was found in his warehouse. While Ugbai owned up to illicit dealing in drug, Ugbai, but said he was amazed that the operatives were able to track him to his residence.
He said:

“I was not lucky enough because I don’t know how they detected my cannabis warehouse. I sell cannabis to take care of my family and pay my children’s school fees. The officers found 79 bags of cannabis in my store.”

The FCT commander of the NDLEA, Mrs. Chinyere Obijuru, confirmed the two arrests in a statement. She said Okafor would be handed over to the Economic and Financial Crimes Commission for further investigation, while Ugbai would be charged to court.

“Okafor was on board a commercial bus from Onitsha in Anambra State when N48,450,000 was found in a brown carton concealed in a sack. He also had on him 86,500 CFA. He claimed that the money belongs to a bureau de change at Onitsha. He is suspected to be engaging in money laundering and will be transferred to the EFCC for further investigation. “Ugbai was arrested at Bako village in the Kwali Area Council following the discovery of his cannabis warehouse. He will soon be charged to court for unlawful possession of cannabis.”

The NDLEA Chairman, Ahmadu Giade, said the agency would continue to clamp down on drug traffickers and urged the public to comply with the provisions of the anti-money laundering act.

Man Reportedly Murders Son For Threatening To Kill Him